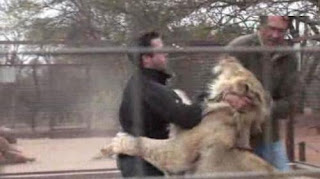 Journalist mauled after entering lion's enclosure
“You'd better put on an old jumper as you might get some blood on it,” said our driver, with a grin, as we clambered into the Land Rover to visit the lion sanctuary at Legends resort, deep in Limpopo Province, in the far north of South Africa.
VIDEO LINK: http://www.telegraph.co.uk/travel/travelnews/6139806/Daily-Telegraph-writer-mauled-after-entering-lions-enclosure.html
NEWS LINK: http://www.youtube.com/watch?v=VJgsmr92udc
VIDEO COPYRIGHT: © TELEGRAPH.CO.UK ।। To license this video clip, please contact
syndication@telegraph.co.uk
HIGHLIGHT: कहानी ब्रिटिश अखबार डेली टेलिग्राफ़ के पत्रकार स्टार्मर स्मिथ की है जिस पर एक शेर का बच्चा “मप्पीमपन” हमला कर देता है। ये हमला तब होता है जब स्मिथ उस शेर के बच्चे को प्यार कर रहा होता है और उसका दोस्त इस दृश्य को शूट कर रहा होता है। ये कहानी बताती है कि शेर का मासूम बच्चा भी कितना खतरनाक हो सकता है, विजुअल इफोक्टिव है और स्टोरी जानदार।
A JOURNALIST sent to a wildlife park to “play” with a one-year-old lion bit off more than he could chew – which is almost what the animal did with him. British reporter Charles Starmer Smith was allowed into the cage of one-year-old lion Mapimpan, whose name means “little baby”, and was subsequently mauled by the animal while its trainer tried to calm it down. Starmer Smith, a journalist working for UK newspaper The Daily Telegraph, watched as Mapimpan locked its jaws around one of his legs before targeting his face.The lion had to make do with the journalist’s shoulder after Starmer Smith threw his arms up to protect his head.
Video footage of the attack and it’s aftermath shows the journalist’s skin punctured in several places.Starmer Smith had travelled to the South African park to present travel videos about the country, and he said he was warned of the risk of injuries if he went into the cage.He said he was rubbing the lion’s belly when it decided to bite his leg.
“It rose on to its haunches, towering above me and I was spun into a waltz with a 300lb (136kg) predator – as I pushed desperately at its throat to keep away its jaws,” Starmer Smith said.”This did not feel like playing.”He said that the lion appeared to have calmed down – before rising for Round 2.
“(It) was on me again, its teeth bared as it lunged towards my neck. I raised my forearm to divert its jaws from my face, then felt razor-sharp teeth ripping into my shoulder.
“The next few seconds were a blur of claws, teeth and shouts as I stumbled around, helpless against the power of this animal.”He required stitches for his injuries.
© rajivkmishra\27\09\09\telegraph
Posted by Rajiv K Mishra at 8:34 AM 1 comment: 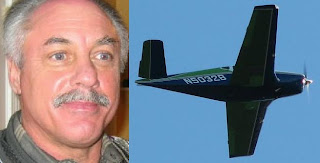 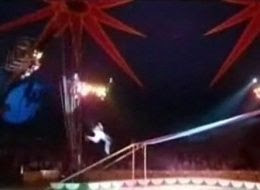 Cannonball man falls short
VIDEO LINK: http://www.youtube.com/watch?v=THsS-5FAQSQ
NEWS LINK: http://media.smh.com.au/outer-net/weird-week/cannonball-man-falls-short-748314.html?&from=strap
VIDEO COPYRIGHT: © REUTERS
Highlight: कोलंबियन सर्कस के जोकर की कहानी, तोप से उड़ाया गया, लेकिन धोखे से चट्टान पर गिर गया।
Sep. 22 - A cannonball man at a Colombian circus in Cali was seriously injured after the stunt went awry and he landed short of his target net.
The freak accident was caught on camera and showed the exact moment when performer Israel Gaska was shot out of the cannon and plummeted to the ground after he failed to reach his target.
According to doctors, Gaska fractured several bones after he fell from a 20-meter height and would remain in the hospital under observation for at least a week.

© Please check the copyright issues (Terms & condition) before use.
Posted by Rajiv K Mishra at 5:10 AM No comments:

Internet has emerged as potential weapon in news world. Incidents happening in Sierra Leone, Somalia, and Palestine are reported within minutes on the net. Interesting videos are available on various issues, which go unnoticed. My effort is to collect all such news\videos\issues from the internet & put it on this blog. Of course …It's free....! I also expect readers to support my Endeavour towards border free news proliferation. Newspapers\ Television Channels\ Websites can use the content, provided they check the copyright issues before using the same. 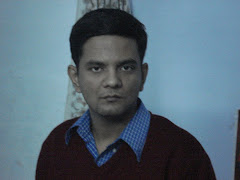 Rajiv K Mishra
Curious, nomadic thinker, lost in transition...Trying to re-discover self! 30 Years of experience in handling the life. Yet, at times fails miserably. Still, dare to hope…conviction, I will walk someday. journalist ..bitten by wanderlust..a soul searcher and anything from diplomacy to politics that's in between. views and opinions expressed are personal! Feel Free: rajiv.journalist@gmail.com